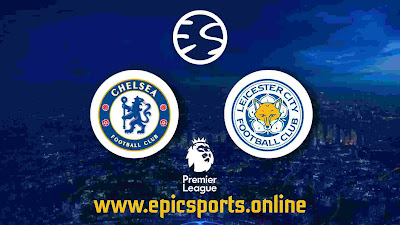 advertisement
🏴󠁧󠁢󠁥󠁮󠁧󠁿 Chelsea XI : Mendy; Thiago Silva, Chalobah, Rüdiger; James, Kanté, Jorginho, Marcos Alonso; Ziyech, Pulisic; Lukaku
🏴󠁧󠁢󠁥󠁮󠁧󠁿 Leicester XI : Schmeichel; Thomas, Amartey, Fofana, Evans, Castagne; Mendy, Dewsbury-Hall, Maddison; Iheanacho; Vardy.
🔴 FT : Chelsea | 1 - 1 | Leicester City
6' | 0 - 1 | James Maddison
34' | 1 - 1 | Marcos Alonso
Chelsea | WDLDWD
Chelsea head into this match following a 0-0 FA Cup tied result against Liverpool.
In that match, Chelsea had 47% possession and 10 attempts at goal with 2 of them on target. On the other side, Liverpool had 17 attempts on goal with 2 of them on target. Liverpool ran out winners after a 5-6 penalty shootout.
Their most recent results reveal that there has been much resilience in the Chelsea backline. Chelsea have been mean at the back, resulting in the total number of goals that have flown into the back of their net over the course of their previous 6 games standing at 4. We will just have to see if that trend will be continued on into this next match.
Leicester City | DLLLWW 🌤
Leicester City come into this clash after a 1-5 Premier League win with the downing of Watford in their last outing.
In that game, Leicester City managed 59% possession and 13 shots at goal with 7 of them on target. For Leicester City, the goals were scored by James Maddison (18'), Jamie Vardy (22', 70') and Harvey Barnes (46', 86'). For their opponents, Watford got 13 attempts at goal with 5 on target. João Pedro (6') was the scorer for Watford.
Looking at their form, and Leicester City have been scored against in 5 of their last 6 games, conceding 8 goals in total. Defensively, Leicester City seem to have a bit of a soft underbelly.
Ahead of this meeting, Leicester City have not won against Chelsea when having played them away from home in the previous 2 matches in the league.
👥 Head to head
Checking on their prior head-to-head meetings going back to 01/02/2020 tells us that Chelsea have won 3 of them and Leicester City 2, with the tally of draws being 1.
A total of 14 goals were scored between the two sides during those clashes, with 8 of them from The Blues and 6 created by The Foxes. The average number of goals per game works out to 2.33.
🗞️ Team News: Chelsea
There aren’t many personnel worries, with just a single fitness concern for the Chelsea boss Thomas Tuchel to be concerned about from of an almost fully healthy squad. Ben Chilwell (Fitness) won’t play.
In all likelihood, The Blues could go for a 3-4-2-1 system in the match with Edouard Mendy, Cesar Azpilicueta, Trevoh Chalobah, Antonio Ruediger, Reece James, N'Golo Kante, Jorginho, Marcos Alonso, Hakim Ziyech, Mason Mount and Romelu Lukaku.
📋 Team News: Leicester City
Owing to an otherwise available squad, there’s just the sole fitness worry for the Leicester City manager Brendan Rodgers to contend with. Wilfred Ndidi (Knee Injury) won’t be playing here.
From our viewpoint, The Foxes seem likely to play in a 4-2-3-1 formation, giving starts to Kasper Schmeichel, Timothy Castagne, Wesley Fofana, Jonny Evans, James Justin, Youri Tielemans, K. Dewsbury-Hall, Marc Albrighton, James Maddison, Harvey Barnes and Jamie Vardy.
#KR
#EPICSPORTS

Popular posts from this blog