Robert Lewandowski in an interview with altobelli on joining Barcelona 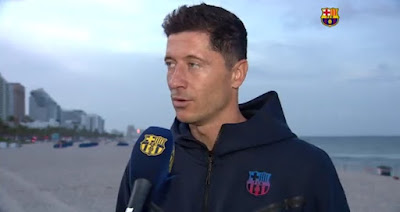 🗣️: "I wanted to play in another league than the Bundesliga, I had made that decision for a long time. But I have to emphasize that was the most difficult decision of my life."

🗣️: "Everything happened very quickly. There wasn't much time to think about anything. Now I'm happy that we found a solution. I'm happy that I can quickly get back on the pitch with Barcelona. For me, this is the next step in my career."

🎙️| Robert Lewandowski to @BILD: “Xavi has a clear plan on how to bring FC Barcelona back to the top.”

🎙| Lewandowski: “Barcelona had problems last season, but the club has incredible potential and has made good transfers now. I think the club is on the right track, back to the top. My goal is very clear to get up there with Barça and win trophies.” [@altobelli13]

🎙️| Lewandowski: “Bayern offered a contract until 2024 while as Barça offered until 2026? I know I’ll be 34 soon. But I feel very strong physically and mentally. Barcelona saw things the same way.” [@altobelli13]

🎙️| Lewandowski: “Meeting with Xavi in Ibiza? It was actually by chance. But we had good chemistry straight away, he told me, ‘I’ll wait for you’, Xavi has a clear plan on how to bring Barcelona back to the top. He told me we can achieve a lot together.”

Lewandowski: I also told my colleagues that I would go back to Munich for an appropriate farewell after returning from the United States with Barca. which will last until July 30.

Lewandowski: I have already started to learn Spanish, but now I have to put in more effort.

Lewandowski: There will be a proper farewell. I also want to give gifts to my colleagues, the technical staff and the club's staff.

Lewandowski: There are things that happened on both sides that should not have happened. But some of them had to happen until we finally found a solution. I think both parties are happy now. Bayern got a lot of money and I was able to go to Barcelona.