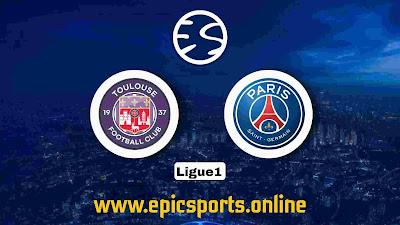 Toulouse | WLDWDL ⚖
Toulouse will be hoping to return to winning ways here following a 3-1 Ligue 1 defeat last time out to Nantes.
In that game, Toulouse managed 50% possession and 9 attempts on goal with 3 of them on target. The scorer for Toulouse was Zakaria Aboukhlal (15'). For their opponents, Nantes had 16 shots on goal with 8 on target. Evann Guessand (50'), Mostafa Mohamed (55') and Moses Simon (61') scored for Nantes.
It has been seldom in recent games that Toulouse have kept a clean sheet. The facts show that Toulouse have failed to prevent opponents from scoring in 5 of their previous 6 clashes, giving up 8 goals on the way. We will see whether or not that trend will be continued on in this game.
Paris Saint-Germain | WWWWWD 📈
In their previous fixture, PSG drew 1-1 in the Ligue 1 match with Monaco.
In that game, Paris Saint-Germain had 67% possession and 18 shots on goal with 5 on target. The scorer for Paris Saint-Germain was Neymar (70'). For their opponents, Monaco got 4 shots on goal with 3 on target. Kevin Volland (20') scored for Monaco.
A succession of resolute performances by the Paris Saint-Germain defenders has resulted in their ‘goals against’ tally amounting to 4 from their last 6 fixtures combined. Over that same period of time, their forwards have scored 27.